The One-Page Resume of Oprah Winfrey

You probably know Oprah Winfrey as America’s first lady of talk shows who gives everyone in her audience free cars. What you probably don’t know is that she’s also an award-winning actress, producer, writer, and philanthropist.

Through her talents and charisma, she’s managed to become the highest-paid performer on television, as well as one of the most influential women internationally.

Her $2.6 billion dollar net worth didn’t come easy, though. Winfrey’s struggles are one of the main reasons she continues to have an easy-going and humble nature, despite her wealth. Her feet are still on the ground - she’s just wearing better shoes.

To match the modesty that characterizes her, we have summarized all of Oprah’s accomplishments and business ventures in a one-page resume. 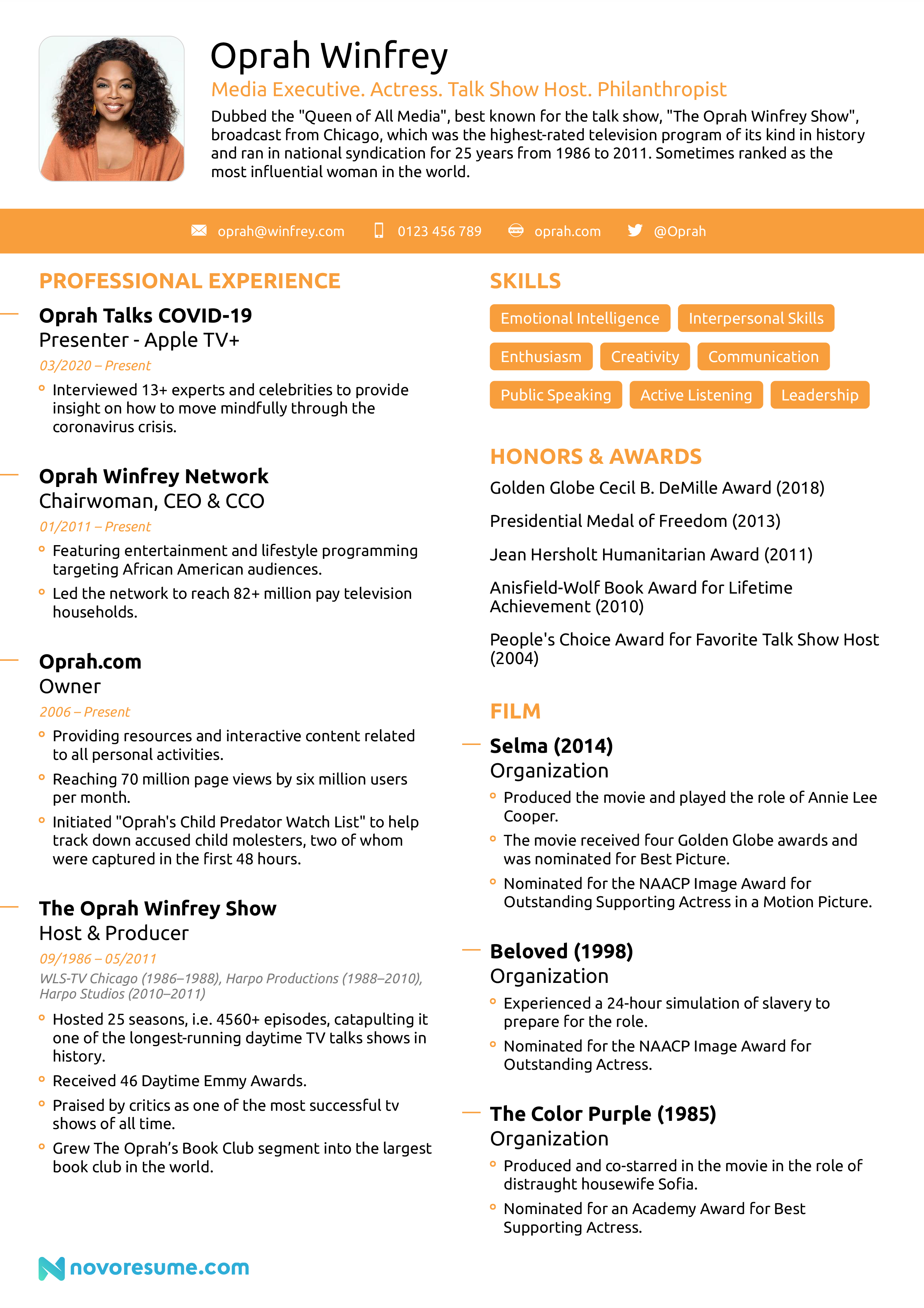 Oprah’s resume was created with one of our top resume templates. Want to create your own? Head over to our online resume builder!

The Powerful Story of Oprah Winfrey

Oprah Gail Winfrey was born in Kosciusko, Mississippi, on January 29, 1954, to a single teenage mother. Growing up, Oprah lived in great poverty and had to wear dresses made of potato sacks as a kid.

That didn’t stop her light from shining through, though. A bright child from the start, she learned to read and recite bible verses by the age of three.

Her favorite activity was interviewing her dolls. Seeing her talent as a young child, Oprah’s grandmother always encouraged her to take the spotlight and talk in front of others.

One of the things that got her through the dark times was reading the autobiography of Maya Angelou, “I Know Why the Caged Bird Sings.” The book gave her the validation she needed to concentrate on her education and public speaking. Winfrey was determined to succeed and she would not let any labels or past struggles define her.

It was 1971, at the age of 17, when Oprah secured a full scholarship in Speech Communications and Performing Arts at Tennessee State University. Winfrey was immediately popular and won Miss Black Nashville and Miss Tennessee in her freshman year.

Around the same time, the WVOL radio station hired her to read the news announcements. 2 years later, Oprah accepted a job as a co-anchor, making her the first African American female to host a radio news show.

But this was only the beginning of her TV empire.

In 1976, Oprah moved to Baltimore, where her professional career started to take off. WJZ-TV scheduled her to handle the local news updates on Good Morning America, and later on, moved her to the talk show Baltimore Is Talking.

In the seven years that Oprah worked there, the ratings of Baltimore is Talking skyrocketed. This led to the general manager of WLS-TV in Chicago noticing Oprah and making her an anchor on A.M. Chicago.

A.M. Chicago and The Color Purple

She first appeared on A.M. Chicago in 1985, when A.M Chicago was drowning in bad ratings. In just a few months, Winfrey turned it into the highest rating show of the city. Numbers towered so high, the program was renamed The Oprah Winfrey Show.

Oprah used this opportunity to talk about current, controversial topics like politics, racism, and even child abuse. The discussion of difficult topics with professionalism and empathy became the key to the show’s extraordinary success.

That same year, Oprah made her film debut in Steven Spielberg’s The Color Purple, which boosted her popularity even more. The film was a huge hit and her brilliant portrayal of housewife Sofia earned her an Oscar nomination for Best Supporting Actress.

In 1986, The Oprah Winfrey Show was officially launched as a nationally syndicated program on 120 channels.

Oprah created an environment where people felt comfortable and willing to share their personal stories, which got her a lot of praise from critics. The show was acclaimed as a “group therapy session”.

Winfrey was a witty, lovable, genuine and compassionate host, and always empathized with her guests and audience. Almost all her celebrity interviews were done on a personal, empathetic level.

Her interview with Michael Jackson ranked as the fourth most-watched event in American television history. Even President Barack Obama made an appearance on the show, three different times! In 2013, he awarded her the Presidential Medal of Freedom.

The program received 46 Daytime Emmy Awards and the Oprah’s Book Club segment became one of the most influential book clubs in the world. The show stopped airing on May 25, 2011.

With 25 seasons and a total of 4562 episodes, The Oprah Winfrey Show is one of the longest-running daytime TV talk shows in history.

As her show was growing and going national in the late 80s, Oprah was making up to $ 100 million a year.

So, she harnessed the opportunity to create her own company, Harpo Productions (Harpo = Oprah spelled backwards).

At first, the idea was to make spin-off shows for some of her famous guests, like Dr. Phil and Rachael Ray. Later on, the business also opened up to producing movies, magazines, and radio shows.

All of these projects reflected Oprah’s television taste and her passion to bring a measure of control and spirituality to her life.

The movie Beloved was one of the first and to this day most successful makings of Harpo. It was based on an award-winning novel by Toni Morrison. Oprah even starred in it herself and was nominated for the NAACP Image Award for Outstanding Actress for her role.

To extend her vision, Oprah co-founded Oxygen Media, a company dedicated to producing cable and Internet programming oriented toward women.

From 2002 till 2006, Oxygen even aired an extension to her regular show called Oprah After The Show. It was a half-hour broadcast that let the audience ask questions to the celebrities that were on the episode of The Oprah Winfrey Show that day.

At this point in her career, Winfrey was one of Time magazine’s 100 Most Influential People of the 20th century and ranked number one on Forbes’ Power Celebrity list. She had a net worth of 2.9 billion dollars and overtook former eBay CEO Meg Whitman as the richest self-made woman in America.

Oprah continued to spread her influence and launched O, The Oprah Magazine, which Fortune has credited as “the most successful start-up ever in the industry.”

O, The Oprah Magazine now has a circulation of two million monthly readers, more than Martha Stewart Living or Vogue. The mission of the magazine is to cover every part of a woman's life - from beauty and fashion to nutrition & health, to sexuality & spirituality.

If these many accomplishments were not enough, her generous and big-hearted nature led Winfrey to become a philanthropist.

In 1987, she founded the Oprah Winfrey Foundation to encourage the empowerment and education of women, children, and families all around the world. The charity has donated millions of dollars to advance healthcare and education.

The humanitarian didn’t stop there:

Another one of Winfrey’s biggest accomplishments is OWN, or the Oprah Winfrey Network, that launched on New Years’ Eve in 2011.

The network first made headlines in 2013, when it aired an exclusive interview between Winfrey and athlete Lance Armstrong. Armstrong came clean about performance-enhancing substances, which attracted a lot of attention to the show.

As of 2015, OWN was made available to 81.9 million pay television households in the US.

Towards the Future with Apple TV

In September 2017, Oprah announced she would join 60 Minutes (a Sunday evening news magazine program) as a special contributor. The show’s executive producer was thrilled to have her. He admired the unique and powerful voice she would bring to the broadcast.

The journey with 60 minutes didn’t last long, though. Oprah told The Hollywood Reporter that she was asked to ‘tone down her emotions, and flatten out her voice.’

That was everything the powerful woman stood up against, so just a year later, Winfrey left the broadcast.

And she already had new plans up her sleeve.

In June 2018, Apple announced a content partnership with Winfrey. She would now create original programs exclusively for Apple TV+.

The first show under the deal, Oprah's Book Club, premiered on November 1, 2019.

The second one began on March 21, 2020, where Oprah talked about the COVID-19 pandemic.

One of her biggest future projects on Apple will be about sexual abuse in the workplace. She expressed that her mission is to let people know that they aren’t alone.

Oprah Winfrey’s rise to fame is fascinating to watch.

Against all odds, she never lost momentum and thus created an empire out of her personal brand. She turned her poverty into strength, her talent into stardom, and her empathy into international influence.

She humanizes celebrities and presidents, gives back so much to the world around her and constantly breaks unprecedented grounds in the media.

We can’t wait to see what she does next!