The One-Page Resume of Richard Branson | By Novorésumé

4 January4 min read
our services are featured in
Content
Top ↑How Did Richard Branson Make His Fortune?The Beginnings of Richard BransonThe Rise of the Virgin GroupTowards the Future: Branson’s Road to Space and Sustainability
Share this article

Richard Branson is one of the most famous investors and philanthropists in the world. Even if you don’t know who he is, you have probably come in contact with one of his brands.

All those companies are part of the Virgin Group: an international conglomerate with hundreds of brands under its portfolio. And Richard Branson is the founder and top guy behind all of them.

Valued at $4.1 billion (as of June 2019), Branson made being an entrepreneur cool before the likes of Steve Jobs, Jeff Bezos, and Elon Musk. He is an adventure-seeker, sustainability enthusiast, and future-oriented investor. Oh, and he holds a Knightship title from Queen Elizabeth II for his entrepreneurial efforts.

With all those achievements under his belt, you’re probably prepared to see a ten-page resume. After all, he is one of the most impressive people in the world.

But we at Novorésumé want to keep proving our point: all you need is ONE PAGE.

So strap in for the rags-to-riches story of Richard Branson and the one-page resume that summarizes it all. 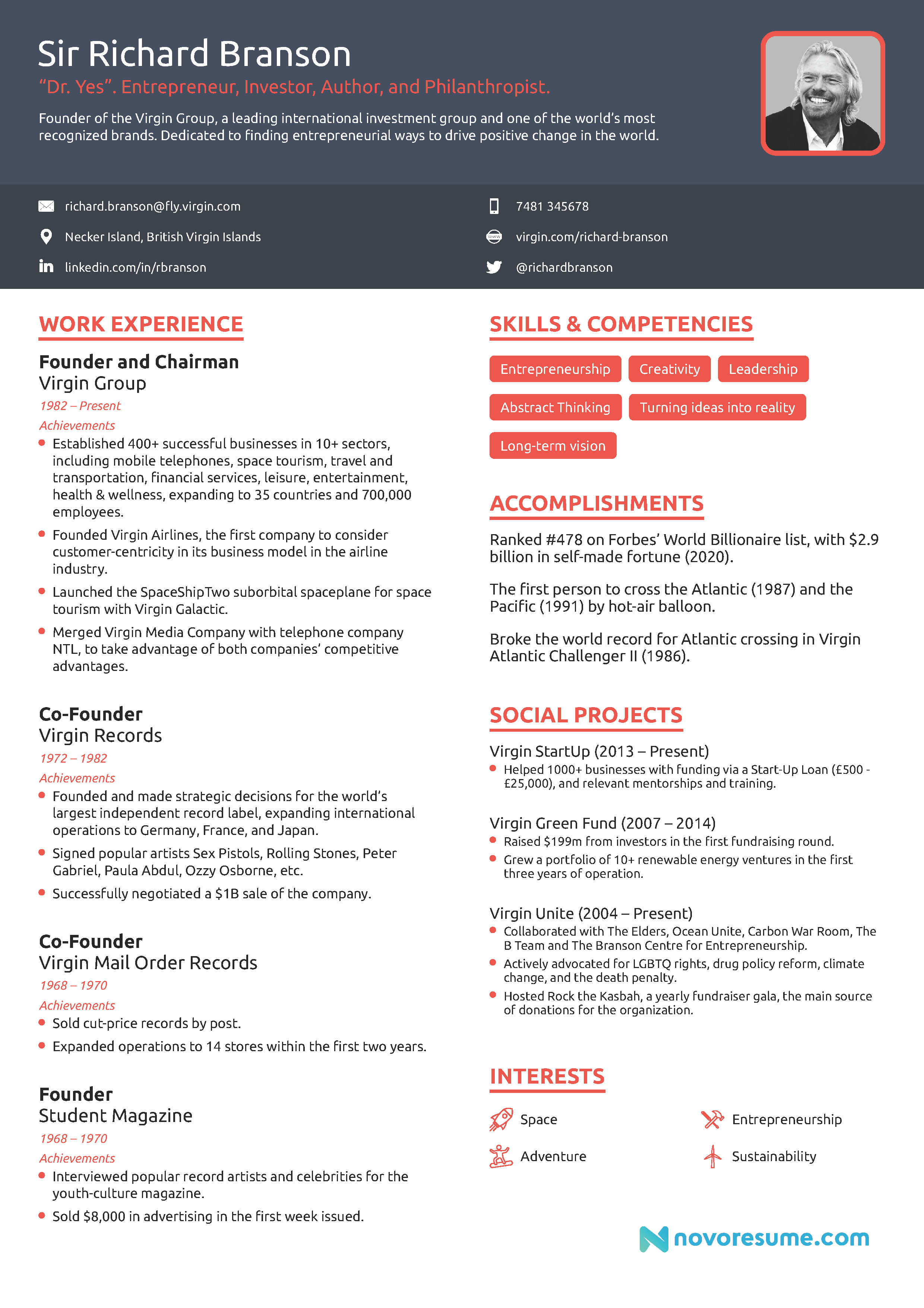 How Did Richard Branson Make His Fortune?

The Beginnings of Richard Branson

Branson was not the best student. From a very young age, he showed a free, entrepreneurial spirit. At the age of 16, he dropped out of Stowe School in Buckinghamshire, England to start his own business.

Along with a friend, in 1968, he launched Student, a youth-culture magazine where he interviewed recording artists. The first weekly issue of Student was distributed for free. Branson paid for the printing and distribution costs with money from advertisers.

As the magazine started to grow, Branson noticed a gap in the market: there was no one operating a record business that shipped to people’s houses. So he decided to open one. In 1970, Virgin Mail Order Records was born.

Branson and his business partner decided on the name Virgin because they were new at business. The company sold cut-price records via post. Within the first two years, it had opened 14 stores.

But Richard did not stop there. His love for music and recordings had grown, and his entrepreneurial desires with them. In 1972, he opened The Manor, a recording studio that would turn out to be the foundation of Virgin Records.

The record company rose to fame and fortune because of its decision to sign (what were considered at the time) bolder, more daring recording artists. Some of these include The Rolling Stones, Sex Pistols, Paula Abdul, and Black Sabbath.

The extraordinary success of these artists made Virgin Records one of the most recognized record labels, and Richard, one of the richest men in the world. In 1978, he was able to buy a British Virgin Island, where he has primarily lived since.

Around this time, he also developed a passion for sporting adventure. A jack of all trades, he is actually the first man to cross both the Atlantic and the Pacific by a hot air balloon.

The Rise of the Virgin Group

In the early eighties, Branson’s flight was canceled on a trip to Puerto Rico. He decided to charter his own flight and offered a trip to all the other passengers for a small fee.

And so, the idea of owning a more accessible airline that focused on customer satisfaction was born. In 1982, Richard bought a travel company and a bunch of aircraft. In 1984, Virgin Airlines started its operations.

From 1982-1992, the Virgin Group expanded in various industries. Some ventures, like the Virgin Megastore and The Holiday nightclub, were successful. Others, however, proved not to be.

Virgin Airlines found itself in a bit of a financial pickle. Branson had to give up his first love to keep his other business afloat. He sold Virgin Records to Thorn EMI for 1 billion dollars. Eyewitnesses say they saw him crying in the streets of London after the sale.

Determined to stay in the music business, he founded Virgin Radio in 1993 and started another record company, V2, in 1996.

More successful entrepreneurial efforts in the telecommunication, train, entertainment, health industries (and many more) have followed in the span of four decades and have Virgin one of the most recognized brands in today’s world. The company has now over 60 businesses serving over 53 million customers worldwide.

And it doesn’t stop there. The Virgin Group is the gift that keeps on giving.

In 2020, the Virgin Group will debut Virgin Voyages, whose cruise ships are designed to hold up to 3,000 guests.

Towards the Future: Branson’s Road to Space and Sustainability

So what is Richard Branson up to now?

Like the giants of its time, Richard Branson has also set his vision towards space-tourism with Virgin Galactic. He wants to make space available for everyone - and offer impeccable customer service in the process. Although it had a rocky start, the company is now making tons of progress on their mission to send the ordinary folks to space.

Virgin Galactic is most known for the creation of the SpaceShipTwo suborbital spaceplane, a spacecraft made specifically for space tourism. Although it’s yet to send people to space, over 600 customers have pre-booked tickets for the first Virgin Galactic trip to space.

With a grown and stable empire, Branson is now able to focus more on the things he is truly passionate about (although he is still chairman of the Virgin Group board). He leads all of Virgin’s CSR initiatives and social projects, such as:

The Branson School of Entrepreneurship is a charitable organization founded in 2005 in South Africa. It provides entrepreneurial training and financial support to disadvantaged youth and give a boost to local economies.

Virgin Startup gives out loans to up-and-coming entrepreneurs. It also provides training and guidance on how to fund and scale a business.

He has also written eleven books, including “Losing My Virginity” and “Screw Business As Usual”. He has a knightship title from Queen Elizabeth II, and is currently valued at $4.1 billion.

Richard Branson’s adventurous spirit and boldness to make ideas into reality have undeniably made him into one of the most successful men alive. He is one of the most admired investors and entrepreneurs in the world and one of the greats of our time.

And it all started with courage, a magazine, and a record shop.