How to Spell “Resume” - Résumé, Resumé, or No Accent?

It’s a question you never think about until the moment you have to write down the word résumé - no, resumé. Or is it just “resume”?

Well, you get our point, right?

It’s a dilemma that’s bound to happen at one point and we’re gonna help you solve it by discussing:

How to Spell “Resume” - Dictionary Definition

Going back to the roots of the word, résumé comes from French. It’s written with an accent on both e-s and it means summary.

The typical résumé is defined as a document containing a summary of one’s relevant job experience and education.

So, to cut it short: The word itself comes from French and has two accents, but it is rarely used in France itself.

What’s the correct way to use it in other countries then?

Let’s see what the most popular dictionaries have to say about it.

So, do we keep the accents or not?

Until recently, the AP (Associated Press) Stylebook strictly advised on transmitting accents from other languages. On their last revision, however, some windows were opened.

Accent marks can be transmitted on names of people who request them and when quoting directly from a foreign language. So, if the context requires it, the AP Stylebook suggests résumé can be used. In regular use, however, “resume” works best.

The Chicago Manual of Style, on the other hand, leaves the issue up to dictionaries - more specifically, the Merriam Webster. If the dictionary accepts accents, we can accept them in language as well.

So, where are we with answering the resume dilemma at this point?

One thing is clear: The resumé spelling is not quite favored.

Either use both accents (résumé) or none at all (resume).

Résumé, Resumé, or Resume? Which One Is It?

If we cross out resumé as an unfavorable choice, that leaves us with a choice between the other two spellings.

Let’s have a look at the cases for and against each of them.

If you use both accents, you’re being 100% grammatically correct. That is, after all, the way the original borrowed word is spelled.

Spelling it this way also makes sure the noun is not confused with the verb to resume.

The downside? Well, outside academics and professional settings, the word is almost never spelled with both accents.

Doing so might often give off the pretentious vibe.

Moving on to the polar opposite - no accents at all - we have to note that this is the most used version in informal contexts.

It follows the rules of English of removing accents when adopting foreign words and it’s simply easier to type.

Its con is that there’s a chance it can get mistaken with the verb to resume.

Despite that, however, it appears that resume is the winning spelling form. It follows the rules of the English language and doesn’t put anyone in a pretentious light.

If you’re corresponding with a recruiter regarding a job position, you can check how they spelled it in the job posting and consider following their lead.

After making your pick, however, stick with it. Using résumé one day and resume the other is an inconsistency that will work to your disadvantage.

If you’ve settled on using the accented spelling of “resume”, these pointers will probably come in handy when having to type.

Speaking of easy fixes, if you’re in the process of writing your resume (or résumé), grab one of our free resume templates. Unlike accents, there’s no way you can go wrong with one of these! 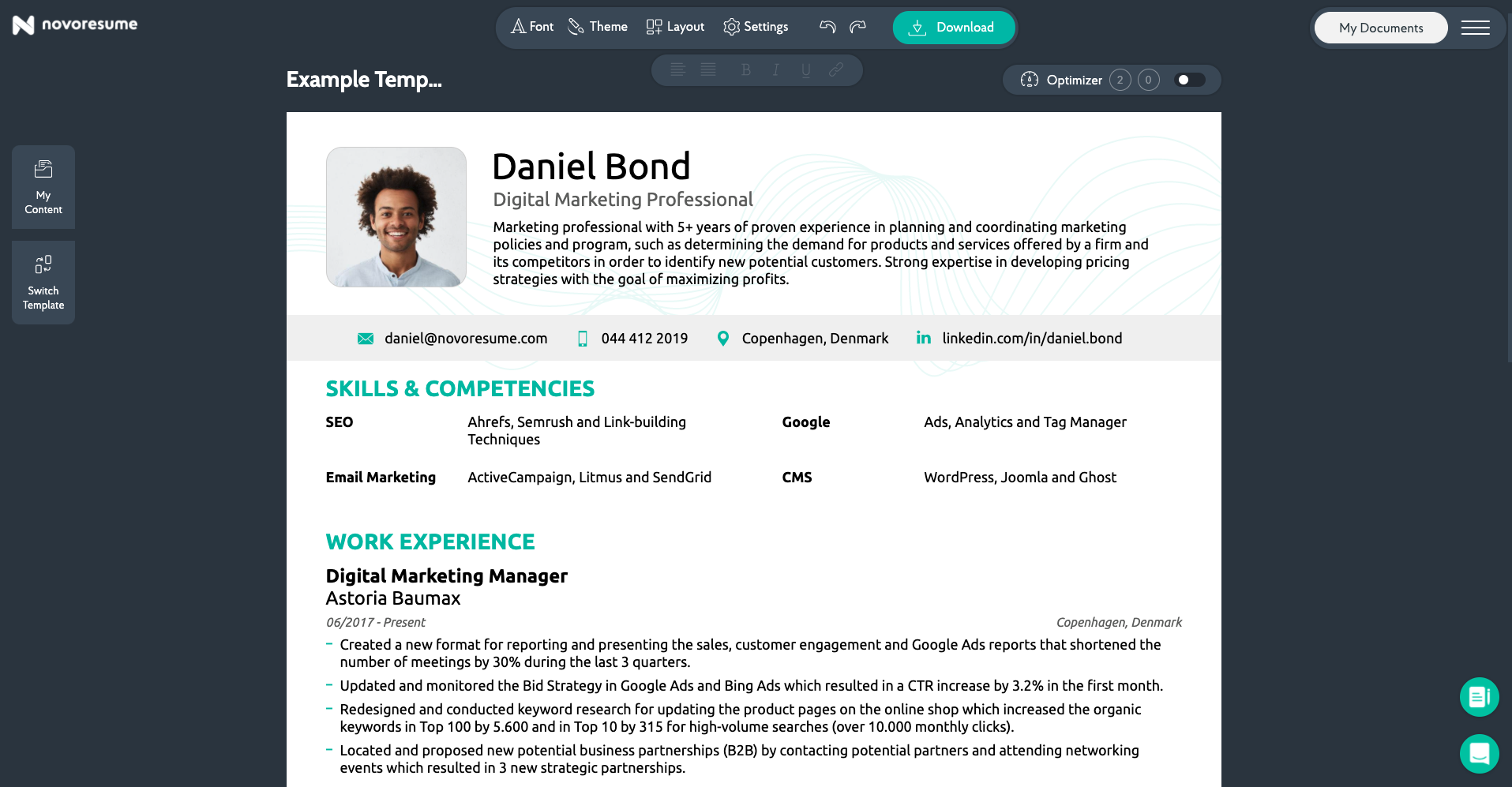 Now that we’ve explained the best ways to spell “resume,” it’s time for you to start working on yours (and land your next job).

Check out some of our top resources below on how to create a compelling resume:

There is no definitive answer to the resume spelling dilemma, but we do hope this article helped clarify the issue and scenarios a bit.

Here are the main lessons we got out of our research: